It’s that time of year again when I escape the clutches of Shad’s claws and have a short break in Tenerife.  I’m only kidding Shad, you know you’re the only one for me!  And of course I missed your 4.30am wake up calls and the way you curl your talons, I mean your tail, around my legs!

Last time I went away I was surrounded by the snow of Innsbruck but this time I opted for scorching sunshine and high winds down at El-Médano to see the Wind and Kite Surfers. 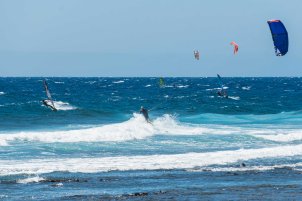 El Médano is one of the world’s best windsurfing/kitesurfing locations, with three different windsurfing spots – the Bay (flat/swell), the Harbour Wall (wavespot sideshore), and Cabezo Beach (wavespot onshore). The main bay is divided into three areas, the general sailing area with very good entry and exit points, the swimming area, marked by a chain of buoys and the pigs bay.  I have no idea why it’s called that. 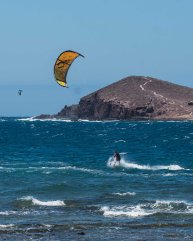 The furball will be pleased he stayed curled up at home because he doesn’t like the heat…… The temperatures hit a high of 37 deg and Shad’s fur coat goes all clumpy and wiry when he gets too hot.  Not a good look.  We won’t mention my curly black hair or as Shad would say silky grey…. 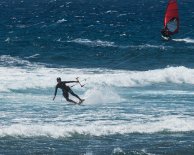 Born and bred in leafy Sussex by the sea, I love the ocean and I have an affinity with water.  Just to clarify, I don’t actually like getting wet but I enjoy dipping my paws in a puddle and flicking it or watch the starlings in the garden splashing around in the bird bath.  The only cats that don’t mind getting wet are tigers that will go for a dip to cool off in the summer sun or catch fish in a fast flowing river in Sumatra.  Personally I am far too fastidious about my fur to risk getting it wet, although I’m always happy to laugh at another cat that does! 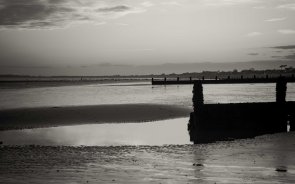 I remember one time I was at my friend Muffin’s house and we both sat looking out through the patio door when grey clouds covered the sky and rain started to lash down in the garden.  Suddenly the cat flap clattered and her sister Tiffin appeared in the kitchen absolutely drenched.  It was as though she had shrunk in the wash and her skin was showing under the wet black fur that was stuck to her sopping body.  Clearly embarrassed, she quivered to shake the water off (I call this a body-wobble) until her owner wrapped her up in a towel and she was restored to her usual dry cottony self.

Another thing I admire about water is its power.  It is said to have mystical powers of healing and relaxation and indeed I have seen John enjoy many a calming hot tub in his time. I’m still in therapy!  But I’m talking about the force of nature, like the massive waterfalls of Yosemite Park in California or the spouting hot springs of the volcanic Geysers in Iceland.  A little closer to home is the sound of waves crashing against the shore and pulling the pebbles across the beach as the swell rolls back and forth.  This was the sound that greeted John and I over the weekend as we took one of our leisurely Sunday strolls along the seafront.  We had a suspicion that the kite surfers would be out given the strong winds so we headed to one of our favourite spots along the prom to find out. 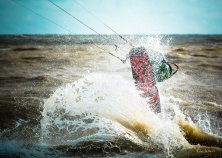 I love taking shots of the kite surfers in action, the muscle tension in their bodies as they manoeuvre the kiteboard into the wind and the ferocity of the thundering waves that break on to the shore.  John and I are now friends with the surfers, having been here a few times before to take pictures, so they gave us a thumbs-up as we watched the forces of nature propel them across the water.  I also made an unexpected friend in the form of a chocolate brown and white spaniel trotting happily across the shingle.  As he came towards me I sat resolutely and fixed him with one of my looks of grandeur, but as he came closer my nose twitched and my lip curled under another force of nature, the musty smell of a damp dog!  Despite my displeasure at the pong of salty wet woofer, he made me laugh running backward and forwards in front of me, wagging his tail and generally being a buffoon.