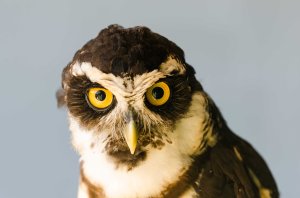 The piercing yellow eyes and unusual white facial markings like an X on its face were not the only remarkable things about this striking bird.  This spectacled owl (don’t you just love that name by the way?!) is one of the many falcons, eagles, owls, buzzards, hawks, kestrels and other character birds (such as kookaburras and ravens) who put on a spectacular show for visitors at Huxley’s Birds of Prey Centre in Horsham.

John and I were escorted by his eldest daughter Natasha to the Centre last week and we were all truly amazed by the relationship the handlers at the Centre have with these beautiful birds.  It is obvious that the birds are extremely well cared for and completely trust the handlers who clearly and honour and respect the birds in return.

In the morning, we got to meet owls up close and personal, like the downy barn owl in the photo, while we enjoyed the picturesque Sussex landscape.  The afternoon was filled with interactive displays where the audience was encouraged to participate whenever possible, helping to fly a variety of birds and ‘oohing’ and ‘aahing’ as the birds demonstrated their natural flight and hunting behaviours.  The handlers were happy to answer questions and seemed to know everything about the different species and their habitats.  We got more than our money’s worth that’s for sure.

The staff devote their time to the care and training of unwanted or ill-treated captive-bred birds of prey as part of the rehabilitation programme.  The Centre also rescues wild or injured birds of prey, returning as many to the wild as possible.  Birds are sometimes brought in by the public, the police or the RSPCA or are recovered from illegal trappers who catch thousands of birds every year to sell in other parts of the world.  This work relies on public donations to help pay for the equipment needed and the vets’ bills.  Luckily they have a couple of dedicated vets as well as the staff and volunteers who work behind the scenes doing the ‘not so glamorous’ jobs such as cleaning the aviaries and weeding the paths.

There were of course lots of fabulous opportunities for us to take pictures.  I’ll leave it up to you to decide which one is the best!!  Pick me, pick me!!

2 thoughts on “Shad does Huxley’s Birds of Prey, Horsham”