When you think of me at the theatre, I’d like you to picture a shapely silky black cat sitting poised and regal upon a red velvet seat in the gilt edged surroundings of the Royal Opera House.  Try to remember that image the next time you read that I fumbled about under the wardrobe searching for my toy snake and emerged with my whiskers covered in cobwebs, or that I chased a frog around the house but ran away when it croaked and John had to rescue it and put it back by the pond.  We are all complex and multi-layered are we not, full of contradictions and surprises.  This particular day I was ‘cultured me’ and my faithful friend John took me on a train ride to our capital city for a trip to the ballet to see The Nutcracker.  It’s the story of a magician who was employed in the royal palace when he invented a trap that killed half the mouse population.  Now I may be guilty of the odd mouse chase, but I would never approve of decimating half a nest of little mice.  Understandably the Queen of the Mice was rather miffed and cast a spell over the magician’s nephew in an act of revenge, turning him into the Nutcracker doll.  To break the spell he would need the love of a lady but not before he had faced the Mouse King in battle.

Melissa Hamilton as The Sugar Plum Fairy in The Royal Ballet production of The Nutcracker (1984), choreographed by Peter Wright after Lev Ivanovich Ivanov (1834-1901) to music by Pyotr Ilyich Tchaikovsky (1840-1893), with set and costume designs by Julia Trevelyan Oman (1930-2003) and lighting design by Mark Henderson. Performed at The Royal Opera House, Covent Garden on 23 December 2011 ***ARPDATA*** THE SLEEPING BEAUTY ; Music by Tchaikovsky ; Choreography by Wright ; The Royal Ballet ; At the Royal Opera House, London, UK ; 23 December 2011 ; Credit: Royal Opera House / ArenaPAL

We had a good journey (which was a bit of a shocker on our train network and far too expensive for a quick jaunt up to London) and finished up at Covent Garden tube station where we admired the front elevation of the Royal Opera House and an elegant sculpture of a young ballerina .  I thought the tube was very clean, prompt and not at all smelly so well done tube humans.  It was a stormy day so Covent Garden was not that busy and my paws kept slipping on the wet cobbled stones.  Luckily a huge silver reindeer left over from Christmas invited me to sit down for a rest so I did whilst John wandered around taking pictures.  I surveyed the quiet old marketplace which comprised a handful of stalls in the arcade surrounded by posh perfume stores, tea shops and chocolatiers.  What a far cry this must be from the days of My Fair Lady when the sound of traders selling their wares would have filled the air and the scent of flowers, fruit and freshly baked bread would have wafted temptingly through every passageway.    Anyway, let’s get back to the story. 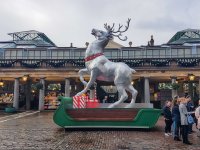 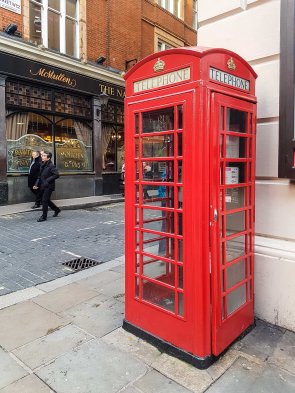 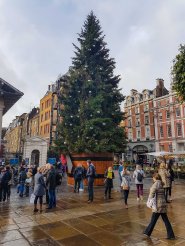 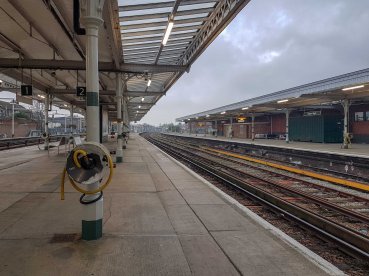 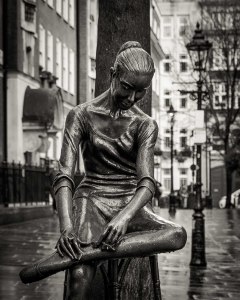 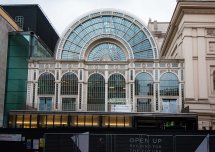 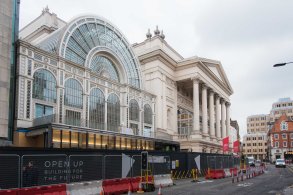 A conflict breaks out between the toy soldiers and the mischief of mice culminating in the Nutcracker slaying the Mouse King with the help of a young woman named Clara.  The spell is broken and the Nutcracker is transformed back into his real self before he embarks on a magical journey with Clara to the Land of Snow and the Kingdom of Sweets.  They watch the Sugar Plum Fairy and her Prince dance delightfully together and meet a whole host of other characters like the Russian folk dancers and the traditional Chinese artists who help them celebrate with a dazzling performance.  The snowflakes move in perfect unison as they leap and pirouette across the stage.  The females dance delicately on their tippy-toes and the chaps with their lithe bodies gracefully execute their grand jeté – a long jump from one foot with a horizontal leg split in mid-air before landing on the other foot.  The orchestra were fabulous playing the musical score written by Tchaikovsky with flair and finesse and I recognised a few pieces including one from a famous TV advert.  The make-up and costumes were stunning and the whole show was a feast for the eyes.  I only wished there was a little fairy dust left over from the magician to sprinkle on the silver reindeer outside who got have got us home in a jiffy!