Despite our differences, horses and cats live together in harmony as though there is a special connection between us.  Don’t get me wrong, I think they’re a little peculiar given that they have one toe on each foot and can sleep standing up.  But I celebrate our differences and enjoy their soft fuzzy muzzles and small gentle eyes.  So I’m always a bit nervous about supporting events that involve the use of my hoofed friends.  Nevertheless I joined John at the Ashfields Carriage and Polo Club in Essex to experience the thrills that humans find so entertaining at the races. 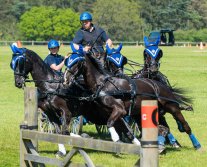 The horses were mighty fine specimens, tall and strong and beautifully groomed and all the riders were dressed to impress in their jodhpurs and breeches.  The sport entails One, two or four horses running like the clappers around a course pulling a carriage that carries two or three people each of whom have a particular role.  The person at the front tends to drive the horses forward shouting commands and tapping them with a whip if they go in the wrong direction.  The horses know what is coming when they line up at the start of the race and are chomping at the bit to get going when the starter drops their flag.  Meanwhile the person at the rear appears to throw themselves across the back of the cart, shifting their weight around presumably to balance the vehicle and stop it careering off the track on the tight turns.  I’m sure this is a simplistic view and professional carriage racers would explain the rules much more eloquently. 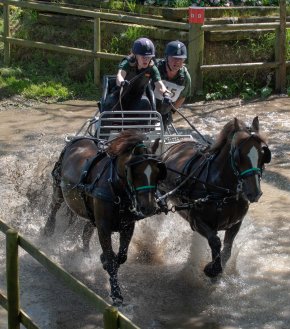 It is a real test of endurance for all participants which is why I was pleased to see that the horses are taken for a drink, some food and a good scrub-down as soon as the race is over.  John got some great action shots and also got splashed with mud at one of the driving obstacles so I suggested he could join the horses in the showers but he wasn’t amused!  Instead he dried off by taking a walk around the paddocks and admiring the Essex countryside while I admired the impeccably manicured lawns.  John would have to mow our garden at home for a week to achieve the kind of short lush grass that surrounded us at the equestrian centre.  I would help but my paws are not designed to push a lawnmower! 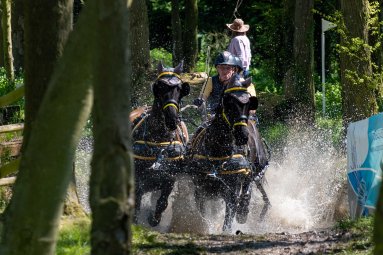 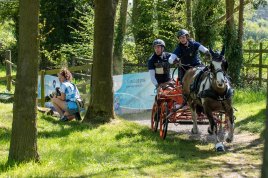 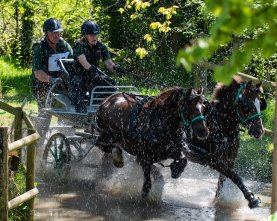