This is Ginger.  He is 3 years old and was found as a kitten abandoned at the Shoreham Cement Works in West Sussex with his brother.  They were rescued by a kind passer-by and taken to a charity where they were re-homed but brought back some time later due to alleged behavioural problems.  When they were 6 months old, they found another new home where they are still very happy.  Possibly due to his difficult start in life, and partly no doubt due to his personality, he was quite withdrawn and wary of human interaction.  But as time as gone by, he has become more confident and friendly and adores attention from his owner. 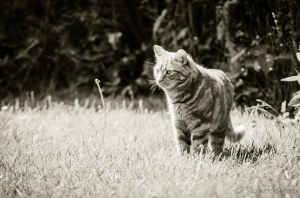 Ginger likes to go hunting for all sorts of creatures, its in his genes, and the bold orange stripes give him the perfect camouflage.  But despite the tough guy image, he’s actually a very gentle and sensitive boy (unless you’re a mouse of course!).  He is fussy with his food but has a big appetite when he gets something he likes.  He can often be seen sitting on the shed (or the neighbours shed!) surveying the area and he purrs very loudly when he’s happy.  He enjoys playing and curling up with another cat for an extra long nap.