These chimpanzees are residents at Whipsnade in Bedfordshire, a zoo and safari park owned by the Zoological Society of London, a charity dedicated to the conservation of wildlife across the planet.  At the beginning of the 20th century there was estimated to be a global population of one to two million chimps.  Sadly there are now fewer than 300,000 living in the wild which is why these chaps are living out the rest of their days in captivity.  Although they will never know the wild where they belong, they are expertly cared for by the staff at the zoo and they play a vital role in educating people about the plight of these little rascals.  The diminishing number of monkeys in the wild is due mainly to habitat loss, human/wildlife conflict and the wildlife trade.  There are some bizarre humans out there who think that keeping a wild animal in their conservatory or a cage in the back yard is a good idea.  So if these primates go extinct in the wild, the animals in this zoo could end up keeping the species alive.

If this bunch of groovy reprobates were to re-populate their species, there might be an extra dollop of crazy in their DNA!  At one point, they were all sitting around quietly hugging and grooming each other when one of the youngsters got bored and darted across the enclosure on all fours like a bucking bronco!  He reminded me of how a cat looks when it does that silly galloping see-saw run at another cat before shooting off in another direction.  So this monkey stops to make sure that someone is looking before he continues to entertain his audience by rolling around on the floor and doing cartwheels. 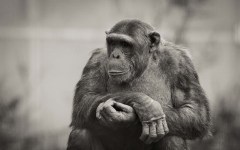 I was captivated by this little fella whose expressions and behaviour reminded me my little niece and nephew when they come over with my auntie to look after me when John is at work.  It is well documented that chimps and humans share as much as 98% of their DNA which makes chimp DNA closer to a human’s than to a gorilla’s.  The young chimp caught me staring at him and scurried towards his climbing frame so I decided to join in the fun and I ran along the edge of the enclosure in the same direction.  He scrambled to the top of the frame as though he wanted to be higher than me so I scampered back the other way and hid behind John’s camera bag.  The monkey started flicking his head from side to side, ducking it down as though looking for me and making funny exaggerated movements with his lips without making a sound.  I reappeared from behind the bag and the other monkeys started laughing and the little one got all embarrassed and hurried back to the group to hide behind his mum.  Then we saw the keeper arrive with a box of fruit and leaves and we knew it was snack time.  Unfortunately there was nothing for me in the box but I had a sneaking suspicion that John had a few of my special protein biscuits hidden somewhere and I was determined to get my cheeky chops on them!