Almost two-thousand runners gathered together on Bognor Regis seafront to push their personal boundaries by running 10 kilometres in the beautiful Sussex sunshine.  John and I decided to show our support by joining them.  Not for the run of course.  I would if I could, but I have an old hip injury from the great ping-pong ball chase of 2011 when I ran too fast across the lounge and reached high velocity, resulting in a spectacular slide through the kitchen and crashing into the litter bag.  Since then I’ve left the running to the experts.  It has nothing whatsoever to do with my generous waist circumference or love of chicken nibbles! 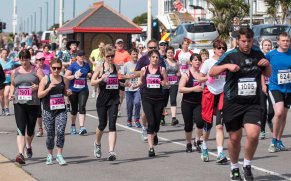 The road race has been staged every year since 1995 and attracts serious runners as well as individuals and families who want to have a good time, raise money for charity and fulfil personal achievements.  The runners jogged and sprinted from West Park in Aldwick to Butlins and back, passing the sun-bathers on the shingle slopes and the jet-skiers propelling their noisy engines into the waves.  I had to take my hat off to the this chap who looked to be well into his seventies dressed as a can of beer collecting money for the Rotary Club of Bognor Hotham who organised this event as part of their community service and fund-raising programme.  He puffed his way past, lifting each leg just an inch or two off the ground, pushing himself forward with an exhausted smile on his face, while some kind passer-by tapped him reassuringly on the shoulder.  Then he stopped to give me a stroke which felt a little sweaty but I appreciated the gesture and responded with a chirpy chirrup to cheer him on. 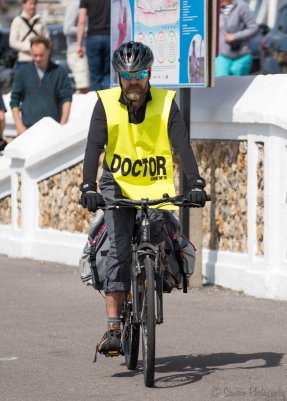 As some of the runners passed the finish line, John and I decided to enjoy an ice-cream along the esplanade and watch the band playing heartening music in the bandstand.  I took a lick of the creamy treat John had bought and contemplated those crazy days when I was a kitten chasing ping-pong balls around the house, leaping up the windows to catch a fly or climbing the bed-post to walk across the beams up by the ceiling.  I took risks back then that I wouldn’t take now, but I didn’t have the wisdom to choose the right ventures.  Now I have the understanding I need to know what’s worth pursuing but I don’t have the fearlessness to pursue them.  Funny how life goes!  But perhaps I don’t need fearlessness, just the energy and courage to fight for what I think is right.  Today it’ll be encouraging an old man to finish a race, tomorrow it’ll be rescuing a worm from drowning in the pond, the day after that, who knows what opportunities for kindness the universe will bring my way.