John and I recently bought a book called ‘Tigger – Memoirs of a Cosmopolitan Cat’ written by Tigger himself, an old chum of mine.  The book depicts the story of Tigger’s life and the adventurous years he spent in the forests and fields of America and Australia before coming to live in England’s green and pleasant land.  Tigger the tomcat was bold and brave, kind and funny, and he tells a great tale about his exploits like the day he met the kangaroos and the first time he saw snow.  Sadly Tigger is no longer with us, but his spirit lives on in the hearts of those who knew him and in the book he wrote.  Tigger was optimistic and unstoppable despite his shaky start in life and his mum describes him as clever and resourceful, a much loved member of the family.  He had a bright orange coat with a white face, chest and paws and remembering him has inspired me to talk to you about ginger cats.

Today I have decided that ginger cats rule and I have included a selection of pictures to demonstrate this!  Most ginger cats are male but not all of them are, like one of my old Cat Protection foster cat buddies who got picked up as a stray and named Garfield because she was ginger.  Everyone assumed she was a boy until a visit to the vet proved otherwise and she had a quick name change to Fluffy before being re-homed to a nice family.   Amongst the pictures are several of the ginger cats that have come through the adoption process like little princess Ellie, and 2 tiny kittens called Neelix and Marmelade who arrived to the fosterer full of worms and covered in fleas.  They were obviously given treatment and lots of love once in the care of the fosterer and have hopefully grown up to be happy healthy cats.  I only knew Mustard for a few days before she was taken to a different fosterer after she had an argument with her sister.  The fluffy one with his chest puffed out is Harry who lived in the pen last year for a few weeks before being re-homed with his brother Bertie.  Louis came into care with his sister Tilly and they were both re-homed last week to a lovely lady who has since informed Cat Protection that the cats are settling in well and getting spoilt every day. 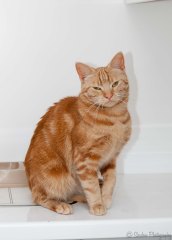 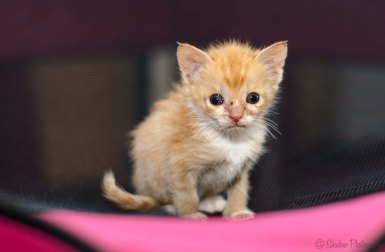 Blacks ones, blue ones, silver ones and white ones, tabby, solid, smoke or point, we cats come in a variety of shapes, sizes and colours.   Tabbies can have narrow stripes that run parallel down their sides (called mackerel tabby) or a classic tabby pattern that has big blotches or swirls of colour.  Single colour cats are generally the result of a recessive gene that suppresses the tabby markings but sometimes you might see indistinct shadows of tabby patterns even on a solid black cat like me whose coat tends to ‘rust’ in the sunlight and turn a lighter brownish shade.  Then you’ve got the ‘black and whites’ like my mate Basil who is a bi-colour (half black and half white), while a mitted cat has just white paws and a cat with a white spot on its chest has a locket.

Contrary to popular belief, the colour of a cat’s coat is not linked to their personality traits and the perpetuation of this misconception has led to concern that feline ‘stereotyping’ is affecting adoption rates at animal shelters.  Research has shown that ginger moggies are the favourites, being perceived as friendly and loveable.  Some of my ginger mates are super affectionate like Rusty Lee who is my latest Cat Protection foster buddy (and is currently available for adoption).  On the other hand, my old chum Ginger is independent and aloof and prefers a dignified chat in the garden to rolling around on the floor gathering dust and rubbing cheeks.  Black cats are apparently still seen as mysterious and unlucky but I’m a black cat and I think I’m really rather lovely.  I’m sure John would agree although he might not have done this morning when I tried to steal his fried egg sandwich after he left it unattended! 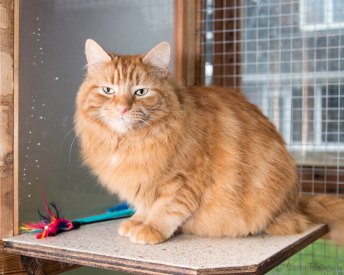