Here are some pictures of two very cute kittens that are currently residing in one of the Cat Protection’s pens in West Sussex.  Some of you may know that John takes photos of the cats for his friend who is a fosterer.  These two poppets came into care from a lady who had lots of cats that were breeding willy-nilly and had never received any veterinary treatment.  Unfortunately this type of situation has a terrible impact on the lives of the cats and the litters born to the females in the household, so these two cuties arrived in the pen with fleas, anaemia, cat flu and conjunctivitis.  Apparently many humans think cats that are related don’t mate but this is not true.  Nature has taught us cats not to be too fussy and it only takes an un-neutered male and female a few seconds alone to make the babies!  You’ll be pleased to hear that Teddy and Tinks are now flea-free, infection-free and feeling much healthier and happier.

The pretty black and white girl is a 2 year old domestic short hair called Jasmine who was surrendered by her owner because she was unhappy and refusing to come indoors, probably due to the noise levels in the house and the unruly children that were causing her stress.  She is friendly, gentle and playful, although a bit shy until she gets to know you.  She has a potential new owner coming to visit her next weekend so let’s hope she is lucky enough to find her forever home soon.

While John and I were in the garden, my mate Ginger came along to check out my photography equipment.  It was good to see my old buddy Ginge and he was very curious about my cameras.  So I started telling him about the importance of using light as a medium and how I store my digital image files, but he cheeky rascal fell asleep on my bag.

I also caught up with my good pal Muffin, the haughty black 5 year old who kept looking through my new binoculars last time I came to visit.  Muffin told me some bad news about my old chum Monty, a blue British Short Hair who was in the pen last year for about 10 weeks.  He was difficult to re-home because he has irritable bowel syndrome and can poop for England!  Fortunately, a nice lady saw past his dodgy tummy and fell for his charming and debonair personality.  Poor Monty was hit by a car a week ago and suffered some serious injuries.  To make matters worse, his owner who loves him very much did not have him insured.  Surgery, stitches, bandages, pain-killers, antibiotics and £2,600 later, he is now home but still not out of the woods.  His recovery will be slow and uncomfortable and his dedicated owner is caring for him while he is on cage-rest as well as working extra hours and taking in foreign students to pay off her credit card bills.  I’m sure you’ll join me in wishing Monty every bit of luck and I hope he pulls through. 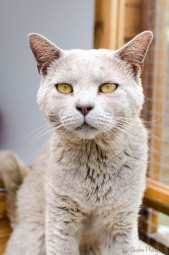