The deepest of greens, the brightest of blues and richest of browns, birds come in a stunning variety of sizes and colours.   They chirp, twitter, chirrup and cheap, squawk, croak and whistle.  If there was a prize for the species with the widest ranges of noises, surely they’d win hands down!  Or beaks up!  I was so excited when John’s daughter Natasha pitched up at the house and we bundled into the car on this cloudy grey day to visit the Wildlife and Wetlands Trust site in Arundel, West Sussex.  The Trust has spent many years protecting the wetland landscapes and conserving the thousands of species who rely on it or live in it.  Like the Whirligig Beetle who looks like a shiny black opal that gyrates around the surface of the water looking for aquatic insects to feed on.  If you think the word Whirligig is amusing, there are lots of funny named creatures in the wetlands.  See if you can spot the Taiga Bean Goose in the photos, a speckled brown bird with striped wings and an orange patch on her beak.

Surges of adrenalin coursed through my veins every time I saw the flicker of a wing or heard the splash of water but I knew to keep my distance from the vibrant wildlife given my appearance as a sleek black predator.  If only the birds and mice knew that I’m a sophisticated feline who jointly runs a photography business and has an active interest in the caring for all things nature.  As I hopped over the gaps in the wooden slats of the walkway and headed towards the thatched hide, a pair of Brent Geese floated regally by on the water, their reflections perfectly captured in the shallows beneath.  I peeked through the thick pallid winter reeds to spy on a lapwing cruising towards the bank with his fabulous feathered crown standing proudly at the back of his black head.  Suddenly John whispered to me to look up and there a Canada Goose hurtled towards me from the skies above.  I ducked my head down and ran away as she landed on the water with an enormous splash, quickly regaining her composure before gliding off with relative grace. 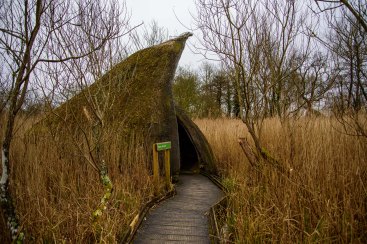 The handsome Kingfisher is one of my favourite birds, smartly dressed in blue and orange and contrasting with the pair of Shoveler Ducks with their shovel-like bills that were drifting elegantly by.  A Curlew paddled across the sandy wet terrain looking for worms and seeds to eat whilst a pair of Mallards with their characteristic blue stripe on their sides headed towards the long dry grass in search of a cosy corner to spend the night.  The trees and bushes provided camouflage for many perching birds like the Blue Tits who weigh a tiny 10g and somehow don’t get blown away by the winds.  The slightly larger Great Tit was staring at the freckled Dunnock who had spotted a bug crawling along the branch below and I felt like there was going to be a rumble!  Meanwhile a Chaffinch puffed its pale pink-beige chest out in envy at the Long-tailed Tit who had found a yummy piece of suet just seconds before.  The red, yellow and brown Goldfinch kept his beady eyes on the log mound decorated with 3 giant Stag Beetle replicas.  I sat by the log mound for a rest and started chatting to a delightful little bank vole who told me she scampers to the back of the kitchens every night for crumbs and morsels of food which set me thinking about supper.  Natasha has incredible stamina and could have gone around the Centre one more time but John and I voted for home via an eating establishment after a wonderful day out. 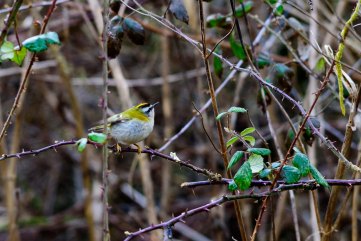 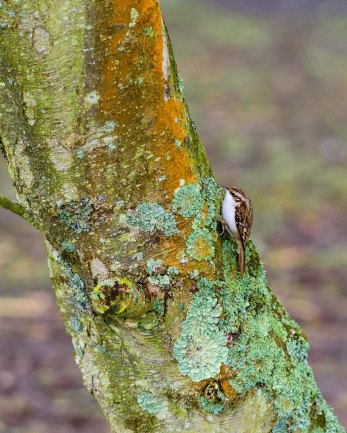 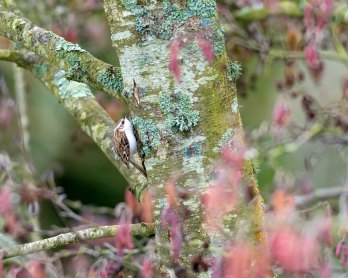 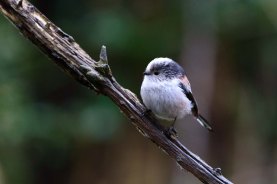