John and I decided to take a short holiday last summer, so we packed an overnight bag and my pet passport and hopped on a plane to visit the bustling and booming capital city of France, otherwise known as the City of Love.  John booked a room in a small hotel in the Montmartre region which is home to a popular Parisian landmark called the Basilica of the Sacred Heart (known locally as Le Sacré-Cœur).  I want you to read that in a French accent please!  It’s located at the summit of the ‘butte’ Montmartre (that’s pronounced ‘boot’ not ‘butt’!) which is the highest point of the city and affords a panoramic view south of the Basilica.  There were 300 steps up to the front of the church which was jam-packed with tourists, dodgy street sellers who kept looking over their shoulders, and amusing street entertainers such as mime artists and a human statue.

Further along the street full of cafés and bars is the birthplace of the modern can-can dance, Le Moulin Rouge, where John took me to see a burlesque extravaganza that evening.  The tickets were very expensive but luckily I was not charged an entrance fee because I reminded them of Le Chat Noir.  Hôtel Le Chat Noir (The Black Cat Hotel) is close-by and was named after a friendly stray black cat found during the renovation of the site.  This fluffy scruffy feline soon became a symbol for the wild and risqué cabaret nightlife that is notorious in the district.  The entertainment was spectacular and the performers were all talented and gorgeous.  John had this dreamy look on his face all the way through. I think he was mesmerised by the flouncing feathers and twirling tassels worn by the leggy ladies.

On our second day, we took a boat trip down the River Seine, stopping at Notre Dame Cathedral on the way.  The Cathedral was built 8 centuries ago and is considered one of the finest examples of French Gothic architecture in the world.

The boat had seats down the middle and walkways along the outside (excuse the lack of nautical terminology, I wouldn’t know my bow from my stern).  We sat comfortably with our lunch and admired the architectural treasures this romantic city had to offer.  The boat departed from the Eiffel Tower and toured the Ȋle de la Cité, an island at the epicenter of Paris.  The on-board guide provided an informative commentary on the history and culture of the surrounding structures, such as the magnificent and ornately decorated bridges that link Ȋle de la Cité to the rest of Paris.

The iron lattice tower named after the engineer Gustave Eiffel, whose company designed and built it, was erected in 1889.  Despite the unbelievably long queues, we couldn’t go to Paris without visiting what is probably one of the most recognisable structures in the world.  The tower has three levels for visitors and when we reached the third, we spent ages gazing out across each of the four sides of the floor, captivated by the outstanding 360° views of the landscape on this clear warm day.  Unfortunately, when we started our descent, I got a severe case of jelly-legs and John had to carry me tucked into his jacket.  I know that doesn’t sound like the normally courageous and adventurous cat that I am, but those stairs were metal and I could see all the way down to the ground through the holes in each step.  We managed the 1,600 steps (well John did anyway!) and I was glad to be back on solid ground.

Before we left for Paris, I had been practising my French so that I could tackle the snooty French waiters!  Little did I know that it would also come in handy for flirting with sultry French felines, and even lead me to enjoy another encounter of a personal nature, which I am far too discreet and gentlemanly to divulge.  Suffice it to say, ooh la la!  I found Paris to be noisy, busy, expensive and uncompromising, but it was also exciting, mysterious, diverse and full of character.  Its a great place to visit and I thoroughly enjoyed the trip. 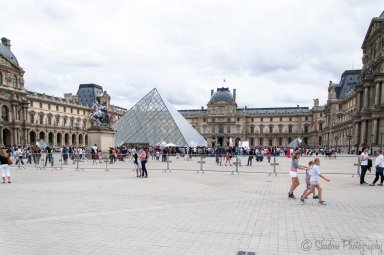 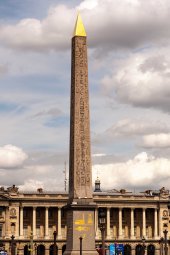