I heard a rumour on the cat grapevine about some 8 week old clouded leopard cubs going on display to the public for the first time in an animal park that has a proven track record in conservation.  And by conservation I mean active involvement in ensuring that wild animals live free in healthy habitats and stay protected from all forms of hunting and poaching.  I was particularly excited about these cubs because the clouded leopard with its rapidly declining numbers is shrouded in mystery.  Native to the Himalayan foothills through mainland Southeast Asia and into China, this charismatic spotted cat is among the most secretive and least understood cat species in the world.  So I was curious to meet them and hoping to get a few tips on ideal napping locations and effective food acquisition techniques.  So John and I took a trip to visit these clouded leopard cubs and their mum far from home in her wooded enclosure. 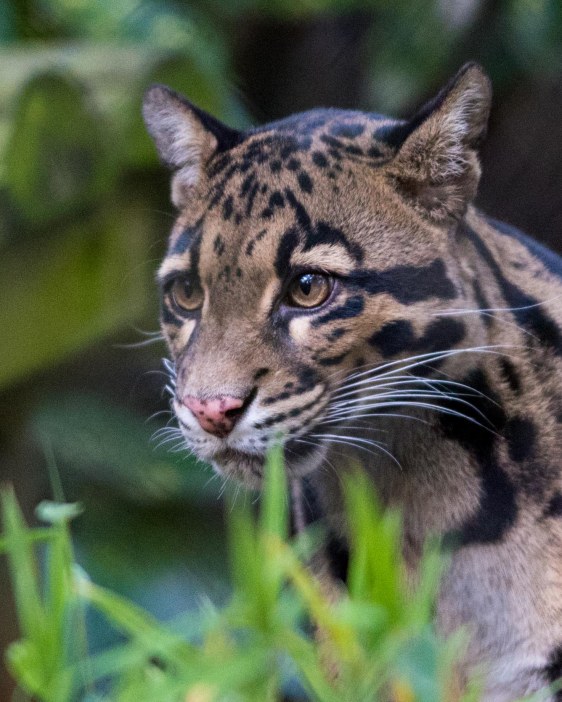 I surveyed her compound searching high and low for this elusive creature and wondered whether she would be happy to see a kindred spirit, albeit a smaller domesticated one.  But her reputation for blending into the background was spot-on and in her natural environment the cloud-like smudges on her coat provide the ultimate camouflage in the dappled light of the forest.  I remembered that she is arboreal meaning that she is adapted to living in the trees so I scanned the boughs of the foliage in her pen and there I saw a pair of eyes watching me inquisitively through a gap in the twigs.  They belonged to a plump joyful clouded-leopard cub that climbed upside down along the branch it was on and descended head first like a squirrel to the ground.  Another precious bundle of fluff came creeping along behind, a little more shy I thought, closely followed by the broad paws of mum looking out for her offspring.  It was charming to watch the two youngsters wrestling with each other, leaping clumsily over each other and practising their vocalisations which sounded like squeaky growls and snorts.  It reminded me of the innocence of my childhood before I was wise to the ways of the world and I hoped that these two would grow up strong and happy and able to contribute to the survival of this extraordinary species.

The health of clouded leopards in captivity has historically been poor due to inadequate housing, exposure to zoo visitors and proximity to resident large predators.  But clouded leopard research and conservation projects have led to a better understanding of their needs and decent zoos now provide more spacious enclosures with multiple nest boxes at a variety of heights to reduce stress.  While the clouded leopard cubs cavorted around, their mum showed me how she sleeps on thick branches on her belly with her paws dangling over the sides in what she calls the ‘downward dog’ position.  The trick is to keep your body straight which allows for balance and ensures you don’t fall off.  She also recommended food based enrichment activities which she said were fun and helped her young develop their hunting skills.  So I vowed to be more cooperative next time John got my biscuit ball out or put some of my dinner on the puzzle feeder.  It was soon time to depart and the zoo was keen to limit the amount of time these guys spend around humans so I wished her all the luck in the world.  Perhaps these little fledglings will one day form part of a reintroduction into the wild where they can live without threat from wildlife traffickers and the exotic animal trade. 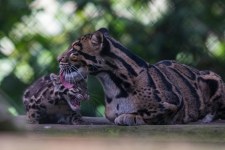 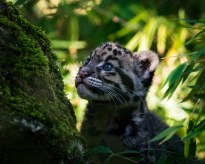