Docked in the Hudson River as the centrepiece of the Intrepid Sea, Air and Space Museum, the aircraft carrier Intrepid stands as a witness to the atrocities and friendships that have been borne out of war.  More than 50,000 men have served on board since its launch in 1943 surviving kamikaze attacks and missile strikes as it continued on its mission to defend its honour and provide a safe haven for its occupants during World War II, the Cold War and the Vietnam War.  I wonder what life was like at sea during conflict and whether they would have liked a cat on board to help control the mouse population and give them something furry and warm to snuggle at night.  Perhaps that’s a question best answered by someone who was there, like one of the US Navy veterans who volunteer at the Museum educating visitors on how the ship was run and speaking about their personal experiences.  I got talking with one of them who stood proudly in the Squadron Ready Room wearing his USS Intrepid bomber jacket and cap with his rank insignia and service stripes on his arm.  He let me take the helm on the navigation bridge and showed me the chart tables, radar consoles and communications equipment.  As I sat on the comfortable slightly torn tan leather chair in front of the radar scopes and plotting boards, I imagined the burden of responsibility held by the Captain the moment that red phone rang with the orders to engage the enemy. 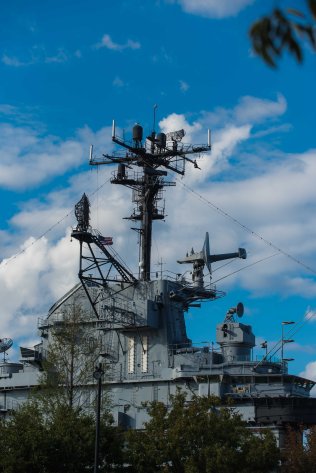 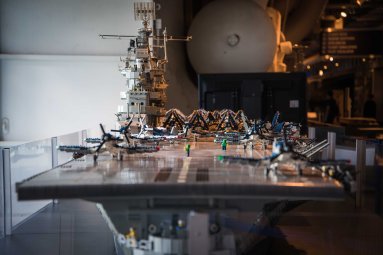 One floor down is the flight deck which exhibits a collection of lovingly restored aircraft, propeller driven jets that supported US ground troops in Vietnam and helicopters that recovered the NASA astronauts in the 1960s.  I strolled along the deck under the pale blue sky admiring the different shapes and abilities of the flying machines before me when a sleek dark lean machine caught my eye.  It was the A-12 Blackbird and reminded me of myself, jet black, powerfully built and formidable.  Don’t laugh!  I might be more generously proportioned and a lot less intimidating, but I’m just as glossy and appealing to the eye.  Shape-wise I’m probably more akin to the H-19 Chickasaw chopper with its chunky dark blue body, soft rounded nose and nifty foldaway blades.  Many of the planes had menacing names like the delta wing Skyhawk, the Crusader, Sea Cobra and Fighting Falcon.  I noticed several were named after my own kind like the Cougar, the Tiger and the F-14 Tom Cat which was the fighter jet featured in the movie Top Gun. 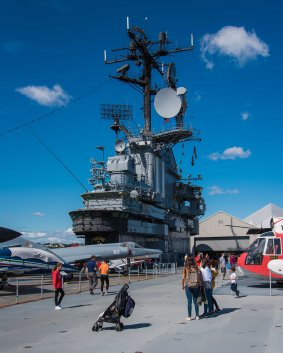 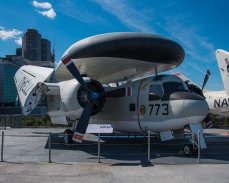 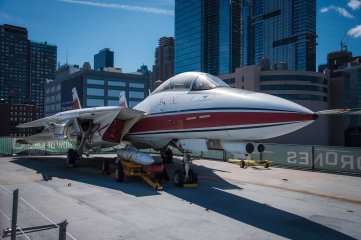 The hangar deck displays some of the technology and hardware that supported the ship before it was decommissioned in 1974 and chronicles its history as well as telling the human story through archival footage.  My attention was drawn by the sound of a human in distress and I looked up to see historic videotape of a crew member being interviewed, weeping as he spoke of the horrors he had witnessed during a battle.  As I walked away I looked behind me and noticed that the people watching the video screen with sorrow in their eyes were from many different countries.  It filled me with hope for humanity to think that if different races could be united in their sadness, perhaps they can face other challenges together towards a goal of peace.  Cats like peace and I’m lucky to have lots of it at home, apart from when the cat from down the road trespasses in my garden and we have fisticuffs under the kitchen door much to John’s displeasure.  The gap under the door is one inch wide so the only thing that gets damaged is our pride as we smack each other’s paws in territorial defiance of each other.  It’s ridiculous really and I soon grow weary, amble back to my food bowl to check for leftovers and curl up on my favourite bed, gathering my strength for the next skirmish.  By the way, in answer to my earlier question, the veteran told me he would have loved a cat a board but it probably wouldn’t have been fair to the cat.  So he now has a cat at home who sounds like she’s as happy and spoilt as I am. 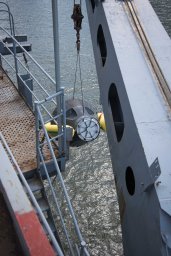 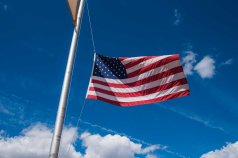