The lights of the big city at night twinkled like a thousand stars in a velvet sky.  The rumble of the boat engines was loud but monotone and gradually faded into the background.  People perched on stools around the small bar in the middle of the indoor section looking eagerly around and chatting avidly, whilst others huddled together on the seats warming their hands over the heaters.  Outdoors on the deck hardy individuals stood against the freezing wind determined to enjoy the full experience of the Harbour Lights at Night boat trip that John and I booked as part of our long weekend stay in The Big Apple.  I bet you thought I’d be curled up in a cosy corner of the cabin with a warm bowl of cat-friendly milk.  But actually I was one of the troopers shivering outside on the benches as the boat charged down the River Hudson and the chilly air parted my fur and made it all clumpy. 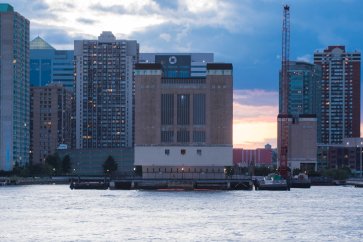 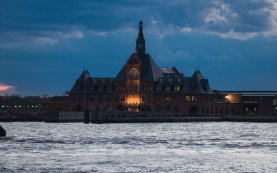 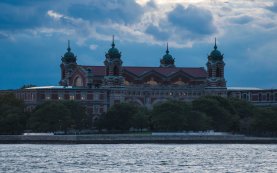 The Statue of Liberty was the first significant sight to behold on our river cruise and by the time we reached it the sun was setting in the West, casting long shadows across the shimmering grey water while the orange horizon gradually transformed to midnight blue.  With her 35 foot waistline, she was an imposing figure standing at 305 feet from the base of the pedestal foundation to the tip of the torch.  But I thought she looked small compared to the plethora of high-rise buildings that sweep across Manhattan Island.  The light green of her robes are the result of natural weathering of the copper that covers the statue and a close look at her feet reveal the symbolic broken shackles of oppression and tyranny.  Her torch is covered with thin sheets of 24carat gold and there are seven rays on her crown, one for each of the continents of the world. 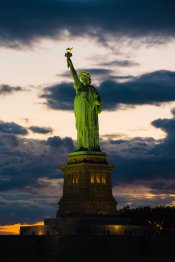 The boat continued chugging South flanking downtown New York as the tour guide whose voice could barely be heard above the roaring engines told us about the buildings we were passing.  The likes of the Empire State Building and the new World Trade Centre stood proud amidst the concrete jungle of office and apartment buildings and brightly lit shop fronts that criss-cross the city.  The captain navigated the edge of Staten Island and took us under the Brooklyn Bridge before showing us a 120 foot long Pepsi Cola sign that has gained landmark status.  The red neon sign was built in 1936 in an industrial area bordering the East River in Long Island City and is a recognisable icon at the waterfront of Queens.  By the time the boat turned around to head back to Pier 83, the river water was pitch black and my fluffy toes were numb with cold.  Happy that I had seen the sun set over New Jersey and the flickering lights of the iconic Manhattan skyline, I headed into the indoor compartment to warm my cockles on John’s thick fleece and wonder how I would cope with the dizzying heights of the Rockefeller Centre which we had planned for the next day. 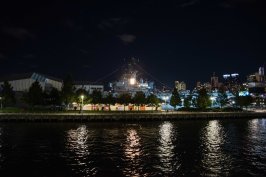