With its dry stony yellow and black terrain, the southern end of the island of Tenerife looks like the planet Mustafar where Jedi Master Obi-Wan Kenobi fought with Anakin Skywalker in Star Wars Episode III.  It marks a pivotal moment when a vulnerable boy corrupted by the evil influences of the Emperor turns on his beloved mentor and falls from grace.  As they duel, light-sabers crackle and buzz with energy while the volcanic landscape around them erupts and scorching lava turns the planet’s crust into a most dangerous battle ground.  Thankfully the only battle I had to face this trip was the one with the fridge door.  Said fridge belongs to two of John’s friends who often invite us over to their apartment by the beach in Golf Sur during the holiday season.  Much as I appreciate the invite, I do wish they would do something about securing feline friendly access to snacks and refreshments which includes having a fridge door that I can open with my paws.  Luckily my rumbling purr and ‘come hither’ eyes have the desired effect and I am usually able to get my sticky mitts on something tasty and revitalising in between naps. 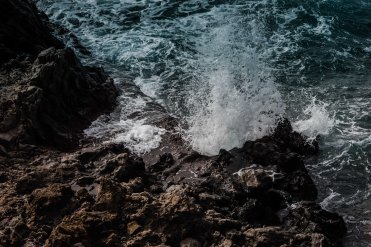 This year’s trip to Tenerife was more exciting than usual following reports in the media of the island’s volcano Mount Teide getting ready to explode after a series of mini-quakes in the autumn.  Apparently seismologists recorded 98 micro-quakes sparking rumours that a mega-tsunami could hit the Atlantic Ocean if Mount Teide, the highest point on Spanish territory, decided to blow.  It was later confirmed that the movements were due to low intensity tectonic shifts rather than up-swelling magma and my concerns about ending up like Obi-Wan, fighting for his life on a bit of hot floating rock, were put to rest.  In fact, the mountain was very well behaved during our trip and looked especially beautiful draped in a white veil of snow.  We drove up the mountain side and stopped at a viewing point for John to take pictures while I watched a funny-looking tan-brown sausage dog scurrying round and round a snowman that his family had made.  He looked like a hyper-active Eewok (Star Wars fans will recognise this reference) but apparently it was his first time in snow so he had every right to be over-excited. 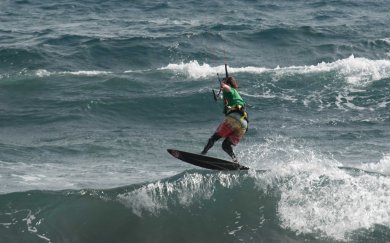