John is fond of all things aeronautical and used to work in the aviation industry where he spent a significant amount of time in airports.  He most recently worked in airport automation (installing IT solutions for baggage handling and check-in systems) but started off his airport duties as a ramp technician, loading and unloading commercial airliners, refuelling, and waving around those little orange flags that guide the aircraft as they taxi on and off the runway.  These days he tends to keep his hands clean and stick to admiring planes from a distance, although he can never resist pointing out an Airbus A380 or a Boeing 747, or telling me something about planes that have recently retired or become operational.  So if John ever asks you if you’ve experienced a Garuda Indonesia, a Mexicana or a China Eastern, he is referring to airlines not restaurant dishes! 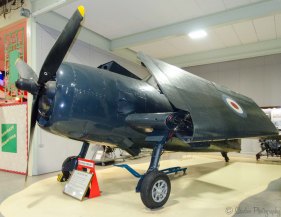 Our trip to the Fleet Air Arm Museum in Somerset was a real delight for John as it combined 2 of his passions in life – photography and aviation.  The journey in the car was long but I didn’t mind because an extended nap was called for to recharge my batteries in preparation for our tour of the halls that hold the assortment of aero engines, drawings, models and military and civilian aircraft on display.  The Museum is Europe’s largest naval aviation collection and stores thousands of objects including examples of the first manned kites towed behind naval vessels, to helium filled airships and modern Sea Harriers.

As I stepped in to the hanger, I looked up to see an enormous fuselage of a modern jet plane hanging from the high ceiling and on the ground was a Hawker Sea Fury – a single seat fighter bomber used by the Royal Navy in the Korean War (1950-1953).  It made me think about the sadness of war and the brave individuals who defend their country’s freedom and pay with their lives.  May be one day there will be no more fighting and humans will be truly humane to each other and to animals.  As the Dalai Lama once said, ‘my religion is simple, my religion is kindness’.  I gave a little nod of respect to the memory of all those who have felt the devastating effects of conflict and continued my adventure through the museum. 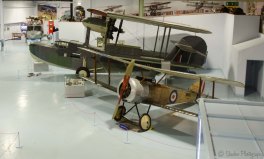 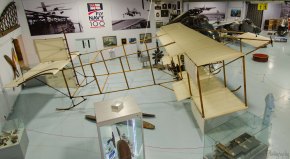 There were helicopters taking off outside and staff working meticulously on restoring custom-built engines and the curved blades of a propeller.  My favourite piece was the Concorde 002, the second prototype of the Anglo-French invention which first took off in April 1969 and achieved supersonic speed on 25th March 1970.  Her test career lasted 7 years and she was placed on display at the Museum in July 1976.  I sat under the delta-shaped wing while the museum guide explained how the aerodynamic centre of pressure moves rearwards during the change from subsonic to supersonic flight and the implications this has for the aircraft’s balance and handling.  It was fascinating but a tad too technical for a feisty feline like me so I snuck off to explore the cockpit nearby while John listened to the physics lecture.  I was having a lovely time playing with the knobs and buttons when it all got a bit embarrassing.  The museum staff had to fetch John because I was allegedly misbehaving.  He came to pick me up rather sheepishly and we beat a hasty retreat!  It wasn’t my fault I got a bit over excited given all the interesting things there were to sniff, jump on and slide down! 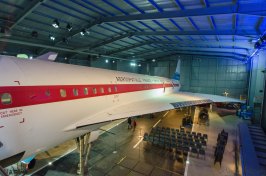 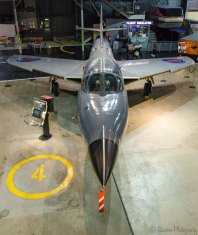