One day, a friendly young kitten was found wandering the streets of Thessaloniki in Greece.  The lady who found this kitten with no name took pity on him because he had no one to care for him and he had suffered an injury.  Despite dragging a lifeless paw around with him, his happy go-lucky nature shone through and he was taken to a shelter to be fostered.  The volunteers at the shelter did all they could to help him, along with the many other kittens and cats they rescue.  He was named Pasas, fed and watered, played with and cuddled, kept free of fleas and parasites, safe and warm.  But they did not have the resources to treat his injured paw which remained limp by his side. 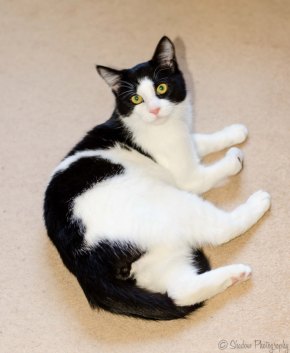 As the weeks turned into months, the plight of this plucky little chap was captured by the Greek Cat Welfare Society, a UK charity which has been working in Greece and the Greek Islands for the last 22 years, neutering colonies of stray cats and educating and supporting local people to have their pets (both cats and doggies) de-sexed.  Despite the lack of food and care and sadly some cat-hating people who poison them and dispose of them cruelly, there are still many thousands of unwanted cats roaming the streets in Greece thanks to our phenomenal potential to breed. 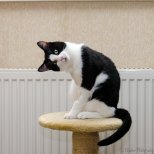 Anyway, to continue the story, a photo of Pasas the Greek boy with the floppy paw was printed in the Greek Cat Welfare Society’s newsletter and caught the eye of an English lady with a love for the feline variety.  She offered him a home and so began the next phase of his journey through life.  He had to be micro-chipped and vaccinated against rabies in order to receive his pet passport, before he was put on a flight to Paris and then driven from Paris all the way to the Sussex coast.  This was all generously paid for by the Greek Cat Welfare Society.

Young Pasas was renamed Zoukia and spent the first couple of weeks in his new home hiding in the cupboard or behind the bed, staring wide-eyed whenever his new owner looked at him.  It must have been scary and stressful to endure the 10 hour journey in a cat box with all those strange noises of the plane and the cars before being taken to a totally different place that smelled and looked unfamiliar and was already occupied by 4 other English rescue cats who didn’t even speak the same language!  But Zoukia is a resilient boy with an instinct to survive and coped admirably with the challenges he faced.  His new owner quickly whipped him off to the vets to get that droopy paw sorted out, especially as he had now developed an ulcer on it where it was always rubbing against the floor.  He was diagnosed with a brachial plexus paralysis (damage to a nerve resulting in a limp paw with no feeling) probably caused by a car accident and the vet recommended amputation. 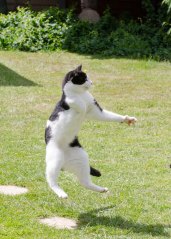 Now you would think that this poor creature, having had such a bad start in life, would end up a shy nervous little sausage barely able to hobble his way to the food bowl for a bit of bread and dripping.  But I can assure you from personal experience of being swiped at by this cheeky little monster on several occasions, he is strong-willed and adventurous and he rules the roost.  He enjoys life and seems oblivious to the fact that he has a paw missing.  May be he wouldn’t fall off fences and stumble out of trees so much if he remembered, but this happy go-lucky cat lives life to the full, and even though he occasionally loses his balance, it doesn’t stop him leaping into the air to catch a moth or hurtling down the garden at top speed after one of the other cats.  What an enormous change from the streets of Thessaloniki city where he grew up.

4 thoughts on “Shad talks about his buddy”