Not many animals can grow themselves a pair of earmuffs every winter to keep their ears warm.  But the attractive ear tufts of the red squirrel are only required during the winter months and are molted in time for summer, ready to sprout again the following year.  I have tufty bits on my ears but they don’t shed and spread according to the season.  Still, I’m not jealous!  Anyway, if I want warm ears, John puts a woolly beanie on my head, which never goes down well because it messes up my coiffure!  The super-friendly red squirrels roam free in the walk-through enclosure and there were also some young ones called kittens can you believe.  I watched them hurtle across the trees and climb up John’s leg and one of them sat on his backpack and nibbled a toggle in case it was a nut.  They didn’t have to wait long for food when the keeper came with a bag of sunflower seeds, pine-nuts, apples and carrots.  It’s a myth that red squirrels eat acorns because in fact the acorn is difficult for the squirrel to digest.  Sadly they are very few in numbers thanks to the introduction of the grey squirrel from North America.  Not the poor old grey squirrel’s fault of course, but they carry a virus that is lethal to reds and have a tendency to gobble up the food before it matures enough for the reds to eat. 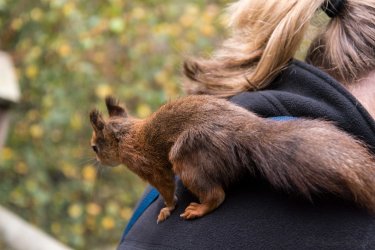 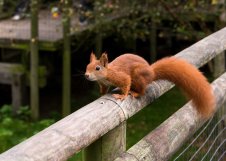 The British Wildlife Centre in Lingfield (Surrey) was the location of my tour of Britain’s nature and it was a fabulous opportunity to see a great collection of species native to the country including buzzards, eagle owls, adders, badgers, Muntjac deer and the endangered water vole.  The dinky little stoats and weasels were only around 7-10cm long and as cute as buttons but apparently they are voracious little carnivores and you wouldn’t want to stick your paw out to one of them.  Stoats, weasels, polecats, mink and pine martens are members of the ‘mustelid’ family and have all faced persecution by being hunted for their fur.  But they are feisty little critters and a few escapees are starting to re-populate numbers in the wild.  Unlike the meek and mild hedgehog who are becoming increasingly rare in the UK’s gardens and hedgerows.  I was lucky enough to watch Turbo, a zippy little spikey thing with the tiniest of noses scuttle around in the grass with her keeper, showing us all how delightful hedgehogs are.  John and I were so moved by their plight for survival that we are now making a few adaptations to the garden to make it a hedgehog friendly place. 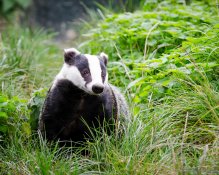 As John and I continued our strolls around this wonderfully natural place, I stopped suddenly, sensing the close proximity of a family relative.  I expected to see fearsome felines as I stalked my way to the Scottish wildcat enclosures, creeping slowly round the corner on my haunches, keeping my head low to the ground as my eyes darted left to right.  But instead of terrifying, the 3 quiet striped tabby cats with bushy ringed tails in front of me were really quite pretty and surprisingly small.  My posture changed to that of a confident moggy with a swagger in his step and a flick in his sleek black tail.  But my cockiness was soon replaced by a healthy respect when I found out that although they have pink noses and white whiskers and are the same size as me, their species dates back to pre-history and they are completely untamable.  Domestic cats like me are descended from the African wildcat and have developed a certain understanding with our human companions, but the Scottish wildcat is truly wild and walked this land for millions of years before mankind arrived or domestic cats even existed.  Even sadder then to find out that they are on the brink of extinction thanks to hunting and habitat destruction.  Once found across the British mainland, they are now confined to the Scottish Highlands and number as a few as 300.  The cats at the Centre represent pure stock and have been identified as suitable for a captive breeding programme aimed at reintroduction to the wild.  In the meantime, they are being well cared for at the Centre and I noticed that all the animals lived in paddocks and pens that reflect their natural habitats, the drinking water in every enclosure was clean, and it was clear that the focus of the Centre was the animals.  So good luck my little furry friends and I hope you prosper! 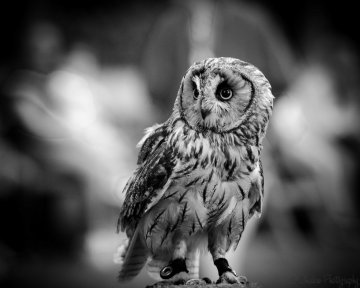 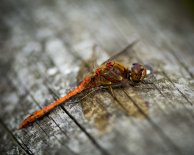 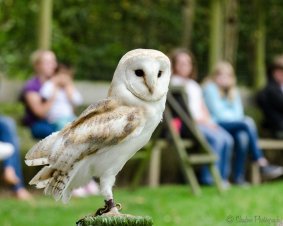 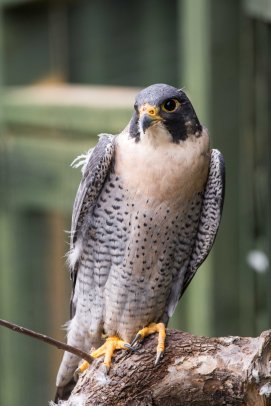 One thought on “Shad does the British Wildlife Centre”