The snowy owl is one of the most recognisable of owls due to its cat-like yellow eyes and unmistakeable white plumage that echoes its Arctic roots.  It’s the largest (by weight) North American owl and is a carnivore, living up to 10 years in the wild and weighing around 3 to 7 lbs (up to 3kg), with a wingspan of 4 or 5 feet (up to 1.5m).  This regal creature is diurnal which means that it is active both day and night, unlike most owls that tend to hunt solely at night.  The snowy owl is a patient hunter with keen eyesight and extraordinary hearing which enable it to identify prey under thick vegetation or snow-cover, before swooping down to deftly seize its quarry with its sharp talons.  The snowy owl’s preferred meal is lemmings (a fierce little rodent smaller than a chipmunk), consuming 3 to 5 each day, and supplementing its diet with rabbits, rodents, birds and fish. 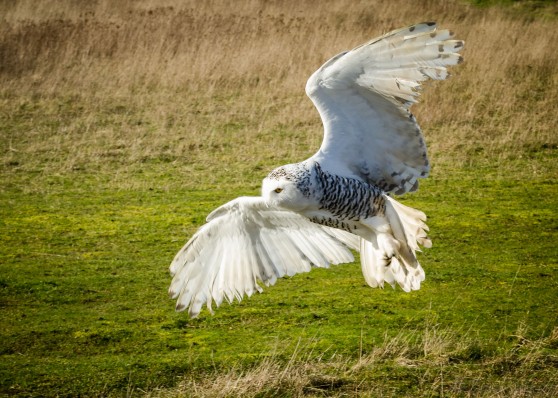 These magnificent owls sometimes remain year-round in their northern breeding grounds, but they are frequent migrants to Canada, the northern United States, Europe, and Asia.  Unless you’re planning to visit the high arctic, you’ll mainly find them in the wild during winter in windswept fields or wide-open areas such as dunes or shorelines, perhaps around Canada or Alaska.  They like tree-less places and rolling terrain where they can find a vantage point to survey the surrounding area, seeking out a good view by perching on telephone poles, buildings, hay-bales, or fence-posts.  In summer, the snowy owl hunts lemmings and other prey in the 24-hour daylight of the Arctic Circle.  Snowy owls were known to breed on the remote islands of the Shetland Isles north of Scotland in the past, but their status in Britain is now that of a rare winter visitor to the Shetland and Outer Hebrides region.

The snowy owl’s beautiful white plumage helps it to hide in its Arctic habitat. They breed on the Arctic tundra, where females lay a clutch of 3 to 11 eggs, depending on the availability of food, and in particularly lean times they may not breed at all. Parents are territorial and brave and will defend their nests against all threats, including wolves and humans.  Only the males are completely white, often flecked with dark brown when they are chicks, they get whiter as they get older.  The females are usually darker than males or may be white with dusky spots on their wings.

I don’t think John will mind me saying that he has the entire collection of Harry Potter movies (for his grandchildren to enjoy so he claims) and I have watched them through on several occasions.  Harry’s owl Hedwig is a snowy owl and although the character is a female, she is played by male owls because their plumage is so white and they are lighter than the females and therefore easier to handle for the human actors.  Seven different owls apparently played the role of Hedwig and their names are Oops, Swoops, Oh Oh, Kasper, Gizmo, Elmo and Bandit.