Otters are one of my favourite kinds of animals because of their happy disposition and kind-hearted attitudes towards each other.  I defy even the grumpiest of humans to watch them and not smile at their playful antics.  They obviously have their duties to perform such as hunting for food, feeding their young, building dens and protecting their environments, but they also engage in lots of fun behaviours just for the sheer enjoyment. 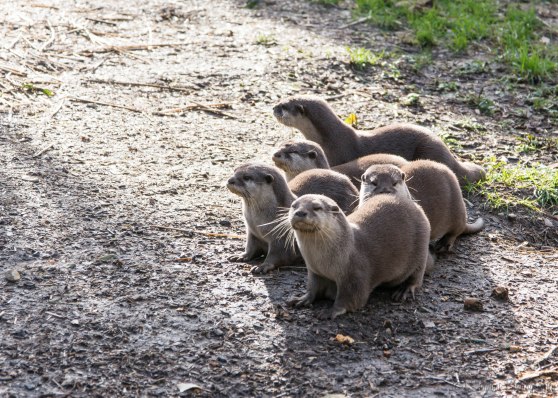 The Asian Short-Clawed otters (the smallest species of otter) were super sociable, chattering constantly to each other and gobbling up their food with gusto.  Apparently they can vocalise 14 different sounds to communicate with each other and they use their feet to find food under the rocks on the river beds where they live in the wild.  We watched the keepers try to replicate this at feeding time by throwing food in places where the otters had to dig using their sensitive webbed feet and those cheeky rascals didn’t miss a single morsel!  They happily chased each other around their enclosure, playing catch with a pebble and juggling a bit of fruit, squawking at the keepers every time they went by. 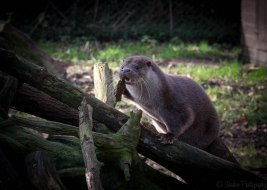 Different species will vary in their social structure, and the Eurasian otter is a more solitary animal, like rescue otter Millie.  The keepers have tried to introduce her to a companion on a couple of occasions but Millie prefers to be a singleton, making friends with the keepers instead, so she will remain in her safe permanent home at the Park.  The keepers also care for around 15 to 20 rescue otters every year, often orphaned young, using minimal human intervention and clandestine means to ensure their needs are met so that they can be released back into the wild.

The giant otter lives in family groups and is the most vocal of the otters, keeping in contact with its group through continuous barking and squeaking.  Habitat destruction and hunting for their fur are the major causes of their decline.  We watched Simuni and Akuri charging around their enclosure, posing for the cameras and diving into their water with ease and grace.

The North American River otter is the only river otter found north of Mexico and was at the brink of extinction due to its beautiful coat being used in the 1700-1800s in the fur trade which saw the slaughter of hundreds of thousands of these precious animals.  Thanks to the efforts of conservation and wildlife rehabilitation centres, their numbers are slowly increasing.  River otters are mostly active at night which might be why Hudson and Jasper were sleeping in their shelters when we visited.